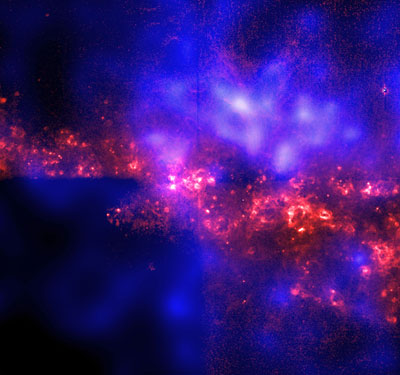 Although Hubble can't point at the sun, it can still take some pretty awesome images, like this one, which shows a halo of hot gas surrounding spiral galaxy NGC 4631 that's similar to the Milky Way galaxy.
NASA/Getty Images

­Although the HST is responsible for countless incredible images and discoveries, it does have a few limitations.

One of these limitations is that the HST can't observe the sun because the intense light and heat would fry its sensitive instruments. For this reason, the HST is always pointed away from the sun. That also means that Hubble can't observe Mercury, Venus and certain stars that are close to the sun either.

In addition to the brightness of objects, Hubble's orbit also restricts what can be seen. Sometimes, targets that astronomers would like Hubble to observe are obstructed by the Earth itself as Hubble orbits. This can limit the time spent observing a given object.

Lastly, the HST passes through a section of the Van Allen radiation belts, where charged particles from the solar winds are trapped by the Earth's magnetic field. These encounters cause high background radiation, which interferes with the instruments' detectors. It's impossible for the telescope to make observations during these periods.

Next learn what the future holds for the great observatory in the sky.