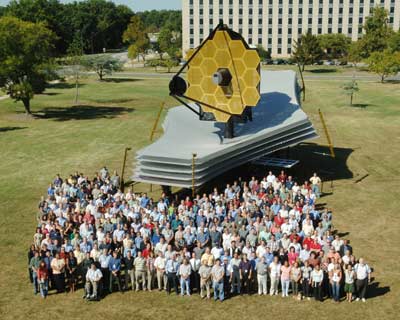 A model of the James Webb Space Telescope on the lawn at Goddard Space Center. You can gauge the size of the telescope by comparing it with the design team standing in front of it.
Photo courtesy ­NASA

At the moment, Hubble's future is a bit uncertain. The final servicing mission was scheduled for Oct. 10, 2008. However, NASA lost a week of preparation time due to a forced evacuation of Mission Control in Houston as Hurricane Ike swept through Texas.

­Then, space shuttle Atlantis was set to blast off Oct. 14, 2008, carrying a crew of seven astronauts to complete the mission -- a journey that would have taken 11 days and extended the ­telescope's life until at least 2013.

However, on Sept. 29, 2008, NASA postponed the final mission until sometime in early 2009, due to a serious breakdown. A failure occurred in Hubble's command and data handling instruments, and it simply stopped capturing and sending the data needed to produce the deep space images that we know and love.

When Atlantis is finally launched, NASA may send a replacement part for the failed component. However, before that can happen, NASA has to test the replacement part and train the astronauts how to install it. In the meantime, the agency is also attempting to activate the backup channel for the command and data-handling system so that the telescope may resume transmitting data.

What's planned for life after Hubble?

Hubble's successor, the James Webb Space Telescope (JWST), named after former NASA administrator James Webb, will study every phase in the history of the universe. From its orbit approximately 1 million miles (1.6 million km) from Earth, the telescope will uncover information about the birth of stars, other solar systems and galaxies, and the evolution of our own solar system.

To make these fascinating discoveries, the JWST will rely primarily on four scientific instruments: a near-infrared (IR) camera, a near-IR multi-object spectrograph, a mid-IR instrument and a tunable filter imager.

Formerly known as the "Next Generation Space Telescope," the JWST is slated to launch in 2013 and has been an international collaboration among NASA, the European Space Agency and the Canadian Space Agency.

But before we move on to the JWST and forget about Hubble, perhaps the hardworking telescope deserves a moment. Thanks to Hubble's unparalleled discoveries, captivating images of what lies beyond the Earth's atmosphere have been made accessible for everyone to enjoy. From a rare alignment between two spiral galaxies to a powerful collision between galaxy clusters, Hubble has brought a little piece of the heavens closer to home.

Keep reading for more links on amazing telescopes and our adventures in space.