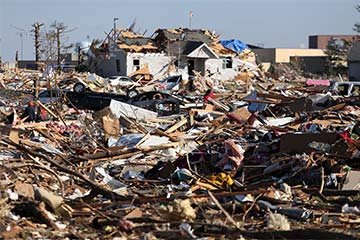 People survey the damage in a subdivision in the aftermath of a tornado on Nov. 18, 2013 in Washington, Illinois.
Tasos Katopodis/Getty Images

On May 22, 2011, an EF5 tornado stretching a mile (1.6 kilometers) wide galloped through Joplin, Missouri, on the back of 200-mile-per-hour (322 kilometer-per-hour) winds. It left a 6-mile (10 kilometer) swath of death and damage in its wake, killing 158 people and making it the deadliest single tornado since 1947. With an estimated $2.8 billion worth of destruction, it became the most expensive tornado in American history, even when the damage of all past U.S. tornadoes was adjusted for inflation [source: Dolce].

While evidence like this seems to indicate, at least anecdotally, that tornadoes are getting stronger, finding clear proof that this is true has proven difficult. A Florida State University researcher, James Elsner, graphed the kinetic energy of tornadoes from 1994 -- when tornado-tracking Doppler radar was introduced -- to 2012. The graph, which measured the length and width of tornadoes and their damage, showed a sharp uptick in powerful tornadoes beginning in 2006. According to the analysis, the wind speeds associated with tornadoes seemed to be rising, causing these twisters to stay on the ground for a greater length of time and creating the potential for more damage. While Elsner was reluctant to conclude that tornadoes were getting stronger, his graph seemed to indicate otherwise [source: Fischetti].

One potential culprit behind the recent changes in tornado severity may be climate change. According to the Global Land-Ocean Temperature Index Graph from NASA's Goddard Institute for Space Studies, the Earth's temperatures have steadily been on the rise since the 1880s. Between 1880 and 2012, the average temperature of both land and water around the world rose by 1.53 degrees Fahrenheit (0.85 degrees Celsius).

The thunderstorms that spawn tornadoes require a few key ingredients to rev up, including warm, moist air and wind shear (wind shear refers to varying wind velocities occurring at a right angle to the wind's direction, causing rotation). As climate change causes the planet to warm, the amount of moisture in the atmosphere will increase as well, lending more energy to thunderstorm formations. However, one of the elements that helps tornadoes form -- wind shear -- will probably decrease as a result of a warmer planet. This give-and-take between more storm energy and less wind shear has scientists scratching their heads, unable to completely predict whether tornadoes will become more powerful and/or more frequent in the future.

One possible outcome is that the frequency and power of thunderstorms with high winds will increase, but we may experience fewer tornadoes. It's also possible that the regions that have historically witnessed the most tornadoes will shift, creating a new Tornado Alley. However, the jury's still out on where -- and whether -- this will occur [sources: National Center for Atmospheric Research, AccuWeather].