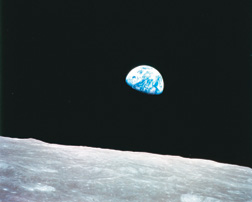 This is one of the most famous space photographs ever taken. Apollo 8 astronauts took this picture of Earth rising over the moon's horizon in December 1968. They took the picture from the lunar command module just after they came out from behind the moon.
Photo courtesy of NASA

Earth is the third planet from the sun, and the fifth largest. It is a terrestrial planet, meaning that it is solid enough to land on, with only one moon. Earth was not named for a Greek or Roman god because the people who first studied the stars and planets didn't think that Earth was a planet. "Earth" just means ground.

If you could see our home planet from space, as the Apollo astronauts did, you would see that Earth looks like a big, beautiful blue marble. Earth is very round. Our home planet is certainly one of the loveliest planets in the solar system, but its beauty is not the only thing that separates it from the rest of its planetary family. The most important fact about our planet is that it is the only planet we know that supports life in any form. Other planets in our solar system may turn out to have life in some form, but, at best, it will probably turn out to be very tiny forms of life, such as microbes. However, at this time, we can't absolutely rule out the possibility of other planetary life in some form.

Another reason why Earth is unique is that it is the only place in the solar system to our knowledge that has liquid water. Water is one of the key ingredients of life as we know it. The water on Earth's surface covers about 70 percent of our planet and its atmosphere, and it is what makes Earth appear blue from outer space.

If you could cut Earth open, you would find that it has a very hot but solid core made up mostly of iron. Outside this center core is a layer of melted metals upon which the outer crust of Earth floats. The crust of our planet holds the oceans and continents with which we are familiar.

The higher temperatures on Earth, which are determined in part by its distance from the sun, allow water to stay in liquid form. If Earth were closer to the sun, however, the oceans would boil away. If it were farther away, the oceans would freeze. All around Earth is a sheltering layer of air called the atmosphere, which helps keep the temperature fairly steady. Earth's atmosphere consists mostly of nitrogen (about 78 percent) and oxygen, with small amounts of carbon dioxide and water vapor. These conditions have allowed life as we know it to develop on Earth.

The actual time for one rotation of the earth is 23 hours and 56 minutes. If you live close to the equator, you experience light for close to 12 hours a day, year-round. If you live north or south of the equator, the length of a day will vary with the seasons.

The atmosphere covering Earth is like a many-layered blanket. The temperatures change as you climb through the different zones from Earth to outer space. Earth's axis is tilted. The combination of this tilt with Earth's annual revolution around the sun causes the seasons to change.

Just the facts on Earth: