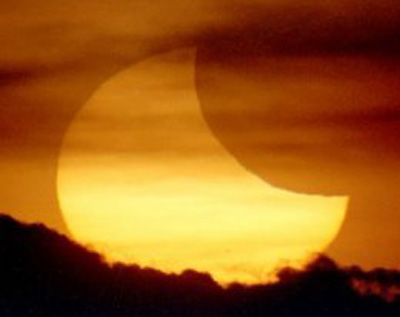 The Earth and moon are tiny compared to the sun, but the moon's shadow can completely cover the sun during an eclipse.
Image courtesy NASA

Compared to the rest of the universe, the Earth is very small. Our planet and eight (or maybe nine) others orbit the sun, which is only one of about 200 billion stars in our galaxy. Our galaxy, the Milky Way, is part of the universe, which includes millions of other galaxies and their stars and planets. By comparison, the Earth is microscopic.

Compared to a person, on the other hand, the Earth is enormous. It has a diameter of 7,926 miles (12,756 kilometers) at the equator, and it has a mass of about 6 x 1024 kilograms. The Earth orbits the sun at a speed of about 66,638 miles per hour (29.79 kilometers per second). Don't dwell on those numbers too long, though; to a lot of people, the Earth is inconceivably, mind-bogglingly big. And it's just a fraction of the size of the sun.

From our perspective on Earth, the sun looks very small. This is because it's about 93 million miles away from us. The sun's diameter at its equator is about 100 times bigger than Earth's, and about a million Earths could fit inside the sun. The sun is inconceivably, mind-bogglingly bigger.

But without the sun, the Earth could not exist. In a sense, the Earth is a giant machine, full of moving parts and complex systems. All those systems need power, and that power comes from the sun.

The sun is an enormous nuclear power source -- through complex reactions, it transforms hydrogen into helium, releasing light and heat. Because of these reactions, every square meter of our planet's surface gets about 342 Watts of energy from the sun every year. This is about 1.7 x 1017 Watts total, or as much as 1.7 billion large power plants could generate [source: NASA]. You can learn about how the sun creates energy in How the Sun Works.

When this energy reaches the Earth, it provides power for a variety of reactions, cycles and systems. It drives the circulation of the atmosphere and the oceans. It makes food for plants, which many people and animals eat. Life on Earth could not exist without the sun, and the planet itself would not have developed without it.

To a casual observer, the sun's most visible contributions to life are light, heat and weather. Now we'll look at how the sun powers each of those.

A World of Spheres

People generally think of the Earth as a "blue marble" or a sphere, although it's really shaped more like a pumpkin. But scientists classify the Earth as several spheres: