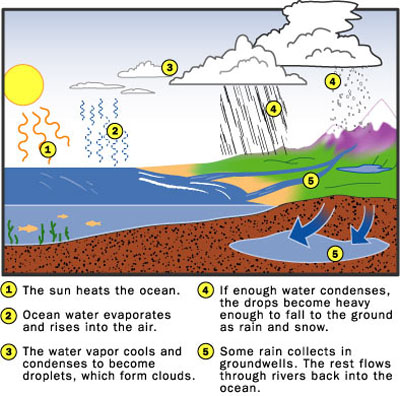 The basics of the water cycle.

The sun has a huge effect on our water. It warms the oceans around the tropics, and its absence cools the water around the poles. Because of this, ocean currents move large amounts of warm and cold water, drastically affecting the weather and climate around the world. The sun also drives the water cycle, which moves about 18,757 cubic miles (495,000 cubic kilometers) of water vapor through the atmosphere every year [ref].

If you've ever gotten out of a swimming pool on a hot day and realized a few minutes later that you were dry again, you have firsthand experience with evaporation. If you've seen water form on the side of a cold drink, you've seen condensation in action. These are primary components of the water cycle, also called the hydrologic cycle, which exchanges moisture between bodies of water and land masses. The water cycle is responsible for clouds and rain as well as our supply of drinking water.

Without the sun to start the process of evaporation, the water cycle wouldn't exist. We wouldn't have clouds, rain or weather. The water on the planet would be stagnant. It would also be solid, since without the sun to warm it, the Earth would be entirely frozen.

The sun powers the processes that control our climate and the content of our atmosphere. Without it, we wouldn't have oxygen or liquid water on our planet. We wouldn't have weather or seasons. But the sun's immense source of power also has some drawbacks. Next, we'll look at some of phenomena that protect Earth from the power of the sun.

Some people imagine the Earth's atmosphere as a blanket of air that gets thinner and colder the higher you go. While the atmosphere does tend to get thinner, it's made of distinct regions, and some outer layers are much hotter than our planet's surface. NASA has a great description of the layers of the atmosphere with links to images of each.