What goes up must come down -- that's gravity in a nutshell, or at least gravity as we most commonly encounter it on Earth. The force is a lot more complicated than that, however. It binds cosmic bodies to their orbits, forms galaxies and stars out of dust and even warps space-time.

Due to rapid scientific advancement, our scientific understanding of gravity has improved quite a bit over the last 50 years. For starters, scientists finally figured out why regions of Canada boast marginally less gravity than the rest of the world.

Yes, early gravity mapping efforts in the 1960s revealed that the Hudson Bay area in particular exerts a weaker gravitational force. Since less mass equals less gravity, there must be less mass underneath these areas -- but why?

Scientists had two theories. Either convection in the planet's liquid core was pulling down on the continental plates or the area had yet to spring back up from glacial ice sheet compression that took place 10,000 years ago. Both scenarios see Earth's surface compressing, pushing some of the gravity-producing mass to either side of the affected area.

In 2007, NASA's twin Gravity Recovery and Climate Experiment (GRACE) satellites mapped the Canadian region, among other areas, from orbit and discovered that ice sheets probably accounted for 25-45 percent of the gravity dampening while convection accounted for 55-75 percent [source: Bryner].

In 2009, the European Space Agency launched its Gravity field and steady-state Ocean Circulation Explorer (GOCE) satellite to aid the GRACE project. Together, the two complementary missions give scientists increasing insight into the Earth's ever-changing gravity field, or geode. GRACE in particular also allows scientists to detect real-time shifts in the planet's water mass, which gives them the ability to determine previously immeasurable quantities, such as groundwater losses in drought-stricken regions.

What does the future hold? Well, with a little luck we'll finally confirm the existence of gravitational waves. Albert Einstein first predicted the existence of such waves back in 1916 as part of his theory of general relativity.

Gravitational waves are ripples in space-time that emanate from certain binary systems (such as two black holes locked in an orbital dance). The waves are too weak to observe directly, but scientists hope to spot them by observing the slight ripples they create in space-time. Special laser-based detection equipment is already in place on Earth and should make it into orbit in 2011. In the meantime, scientists are working to create computer models of binary black hole systems to figure out what gravitational waves might look like.

As gravitational wave research progresses, astronomers will not only learn more about gravity, but also about the big bang itself.

Could You Dig a Tunnel Right Through the Center of Earth?
What's Behind the Gemstones 'Raining' From the Kilauea Volcano
Ancient Human Skeleton Found in Antikythera Shipwreck 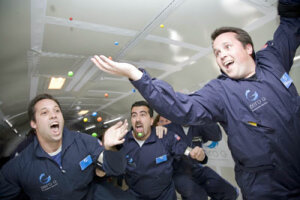