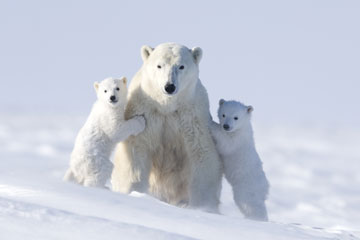 Everyone knows the story of "Goldilocks and the Three Bears." In this classic fairy tale, a trespassing little blond girl discovers that two-thirds of her victims' chairs, beds and bowls of porridge are simply unacceptable. If it's not "just right," then it simply won't suit this pint-sized home invader.

Astronomers often apply this fairy tale to the atmospheres of Venus, Earth and Mars in what they call the Goldilocks principle. Venus' atmosphere is too hot and heavy to sustain life while the atmosphere on Mars is too thin and frigid. That leaves Earth balanced between two inhospitable extremes.

There are five additional planets in our solar system, each as barren and dead as the last -- which makes Goldilocks seem downright amiable by comparison. Life, it would seem, is rather picky.

In 2000, paleontologist Peter D. Ward and astronomer Donald Brownlee took the notion even further with their book "Rare Earth: Why Complex Life Is Uncommon in the Universe." They argued that the odds of finding another living world in all the cosmos were severely unlikely. They called their idea the rare earth hypothesis.

Astronomers disagree on just how rare life is in the universe, but Earth nonetheless boasts several features that make it "just right" for life as we know it:

The right ingredients: A planet needs liquid water, an energy source and chemical building blocks like carbon, oxygen, hydrogen and nitrogen for the life forms we're familiar with to thrive.

The right crust: Gas giants and molten worlds need not apply. Luckily, Earth possesses the suitable distribution of elements to ensure a hot metallic core and a rocky mantle.

The right temperature: The necessity for liquid water also means that planetary temperatures must permit the substance to retain its liquid form in some regions.

The right moon: Our large moon ensures climate stability by minimizing changes in planetary tilt. If our planet didn't have a tilt, it wouldn't have seasons. Likewise, a severe tilt would result in extreme seasons.

The right star: The sun provides Earth with the energy for life and is thankfully rather stable. Imagine baking a pot roast with an oven that might suddenly surge in temperature, die or explode. It wouldn't work for your pot roast, and it certainly wouldn't work for life.

The right neighbors: Jupiter shields Earth from constant stellar bombardment. Without the gas giant in the neighborhood, scientists predict that Earth would endure 10,000 times as many asteroid and comet strikes [source: Villard].

In short, Earth contains all the ingredients and environmental necessities for life to emerge, plus the relative safety for it to evolve unmolested for hundreds of millions of years on end.

What is the definition of insanity?
Can a Vision Board Really Affect Your Future?
The Mystery, Myth and Reality of Plum Island