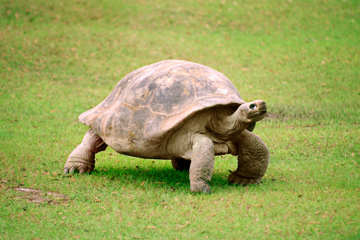 Phylogeny has yielded more precise taxonomy of animals, like the turtle. After years of debate, genetic comparison found turtles to be more closely related to lizards than to birds and crocodiles.
Medioimages/Photodisc/Thinkstock

At around the same time that Pasteur developed his germ theory, Charles Darwin was introducing his theory of evolution to the world. It would contribute what constitutes a logical road map in the search for the first life on Earth. In "The Origin of Species," Darwin references Sir John Herschell's description of the genesis of life on earth as the "mystery of mysteries" and proposes that the species on Earth today weren't independently created. Instead, they evolved in ever-expanding numbers from earlier species through the process of evolution by natural selection [source: Darwin]. At the heart of this line of reasoning is the implication that all organisms could have evolved from a single common ancestor. Thus, the modern investigation into the origin of life on Earth began.

Darwin's work was built upon an already existing system of biological classification proposed in 1753 by Swedish biologist Carl von Linne (known as Linnaeus). Linnaeus developed taxonomy, a system for classifying organisms based generally on physical traits, from the narrowest taxon (species) to a group of related species (genus) and into increasingly broader taxa up to the kingdoms of plants and animals (and originally minerals) [source: Pidwirny]. This system of biological classification has itself evolved over time, with the number of kingdoms expanding and the broadest taxon, domains, established to categorize cells as eukaryotic (containing cells with DNA in a nucleus), bacteria and archaea (the domain of extremophiles).

Over time taxonomy has become more accurate, through the application of genetics. This hybrid field is called phylogeny, where the interrelatedness of organisms is established based on their shared DNA. For example, the related genes (those performing similar functions) found in humans and some types of mice share as much as 90 percent similarity in their DNA sequences [source: Stubbs]. Genetic comparison of chimps and humans yield about 95 percent similarity [source: Pickrell]. These similarities are significant but phylogeny has confirmed what Linnaeus, Darwin and countless other scientists have long postulated -- that every living thing on Earth is related.

The system used to classify living things looks a lot like a tree, with the early organisms making up the root structure, and various taxa narrowing into the trunk, large branches, smaller branches and finally into the leaves that represent the nearly 2 million species currently classified by science [source: O'Loughlin]. This representation is often called the tree of life. Yet as phylogeny has come increasingly into use, it's shown that perhaps the roots of the tree of life are somewhat atypical.