Abiogenesis and the RNA World 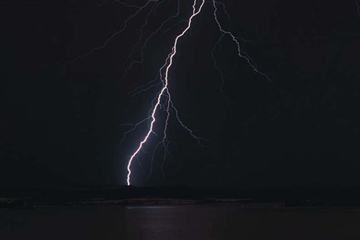 Stanley Miller cleverly introduced an electrical current to the flask simulating the early atmosphere in an attempt to mimic lightning strikes.
Digital Vision/Thinkstock

Here we arrive back at the beginning, as it were. In the 1950s, a graduate student at the University of Chicago named Stanley Miller sought to recreate the conditions found on Earth approximately 3.8 billion years ago, around the time the fossil record first showed life [source: Zimmer]. Miller designed an ingenious and now famous experiment where he added approximate measurements of hydrogen, methane and ammonia into a flask containing water. This element and compounds were thought predominant in the atmosphere of the young Earth. When Miller simulated lightning by adding a spark he found that the solution in his flask now contained something it hadn't before: amino acids.

Amino acids are commonly called the building blocks of life, as they provide the foundation for proteins, which are necessary for organisms' structure and functions. Miller's experiments have held up. For example, an experiment that included hydrogen sulfide and a jet of steam, which simulates the presence of volcanic activity, was later found to be a fairly precise approximation of the early Earth from research that came after Miller's death [source: NASA]. Another implicated formaldehyde as a catalyst for the origin of life [source: Science Daily]. These experiments yielded even more convincing evidence that life on Earth arose from abiogenesis.

The foundation of abiogenesis is that pre-cellular life once existed on Earth. These precursors to life assembled themselves from the amino acids present in the primordial soup recreated by Miller and became the proteins that provide structure to cells and act as enzymes for cellular processes. At some point, these proteins formed genetic templates so that they could be replicated and organized themselves into organelles like ribosomes, which transcribe molecules from these templates [source: Science Daily]. Eventually, these processes came together to create DNA, which forms the basis of cellular life.

Abiogenesis as a theory for the origin of life got a boost in the 1980s when researcher Thomas Cech proved that RNA can act as both a bearer of genetic code as well as an enzyme that catalyzes that code into the creation of molecules. This finding gave rise to the RNA world hypothesis, which is the idea that amino acids first formed into the proteins that make up ribonucleic acid (RNA), which took over and began self-replicating and generating new combinations of proteins creating new pre-cellular -- and eventually cellular -- life.

Under abiogenesis, organic life was created randomly from the inorganic components of life. Its scientific competitor envisions a different beginning to life on Earth.