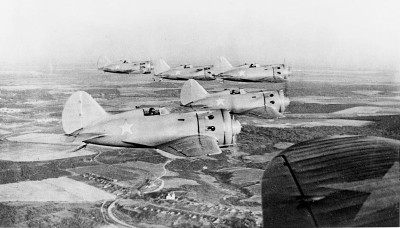 Polikarpov I-16 production had ended in 1940, but it was quickly resumed after the Nazi invasion of the Soviet Union in 1941. See more classic airplane pictures.

The Polikarpov I-16 is one of the most unsung aircraft in history, almost the Rodney Dangerfield of fighters, getting no respect from anyone -- except its opponents. Created by designer Nikolai Nikolayevich Polikarpov, this classic airplane was a brilliant leap forward, particularly for a Soviet aviation industry that was still in its infancy. It was not only the first cantilever monoplane fighter with retractable landing gear to see squadron service in any country in the world, it also was one of the longest-lived fighters of the period, serving until as late as 1950, in Spain.

Such ideas must have frustrated Polikarpov, who was the leading Soviet designer of smaller aircraft prior to World War II. Among Polikarpov's many designs was the U-2 (later the Po-2), a remarkably simple but efficient two-place biplane that was built in greater quantity than any other aircraft in history, with some sources citing as many as 41,000 examples being delivered. He was also responsible for the I-15 and I-153 biplanes that formed the core of Soviet fighter strength for many years. These were remarkably adaptable designs, fully equivalent to the Boeing F4B-4 or Gloster Gauntlets of the time. Some were even used for wild experiments, including pressure cabin studies and ramjets -- rather unusual for fabric-covered biplanes!

But it was the I-16 that would prove to be Polikarpov's major contribution to aviation history. Design work began in early 1933, with the first flight taking place on December 31 of that year. Although somewhat difficult to fly, the I-16's speed, high roll-rate, and rate of climb earned it production status. The aircraft was produced from 1934 through 1939, and was then reinstated to production in 1941, with some 8,650 being built.

See specifications and read more about the classic airplane Polikarpov I-16 on the next page.

A Second Life for Soviet Warplanes

One of the totally unexpected beneficial side effects of the collapse of the Soviet Union was the birth of a small but fascinating industry: the reconstruction of Soviet warplanes for Western sportsmen.

Among the most beautiful of these resurrected warplanes are six I-16s that crashed during 1941-1942, and that remained abandoned for two generations. The wrecks were discovered after laborious search of crash sites by two New Zealand entrepreneurs, Tim Wallis and Ray Mulqueen. Transported to a former I-16 factory in Siberia, they were lovingly rebuilt to original standards and fitted with the 1,000-horsepower Ash-61R engine used on the familiar Antonov AN-2 biplane.

After successful test flights in Russia, the six I-16s (and three I-153s) were shipped to the Alpine Fighter Collection in Wanaka, New Zealand, where they have delighted thousands with their beautiful appearance and performance. You can pick one up for a little less than half a million dollars.

The Soviet Union is said to have sent more than 500 Polikarpov I-16s to Spain during the Spanish Civil War of 1936-39. In combat, the I-16 was clearly superior to the German Heinkel He 51 and Italian Fiat CR-32 biplanes. In China and Manchuria, their opponents were mono-planes, the Japanese Mitsubishi A5M Claude (the Zero's predecessor) and the Nakajima Type 97 Nate.

Although neither of these aircraft had retractable landing gear, they were more maneuverable, and thus more closely competitive. During the Soviet Union's bitter 1939-1940 Winter War with Finland, the Polikarpov I-16 was less successful against the American-built Brewster Buffalos and German-built Fokker D XXIs.

When the Germans invaded the Soviet Union in June 1941, the Ishak (Little Donkey) was semi-obsolescent but still comprised almost two-thirds the total strength of the Red fighter force. Many were shot down. But in the hands of a capable pilot, the I-16 could still surprise even an experienced Luftwaffe flier.

German analysis of the actions of the Red Air Force revealed that Soviet training was deficient and that the Stalinist purges had drained the initiative from all but the most dedicated pilots. But those fliers were fierce and some adopted the Taran, or ramming attack, diving their I-16s directly into enemy aircraft, with no hope of survival.

Like most Soviet aircraft of the period, the Polikarpov I-16 was of mixed construction, with a fabric-covered metal wing and a plywood-covered fuselage of steel-tube construction. The first aircraft to reach squadron service were equipped with an imported 710-horsepower Wright engine that provided a 272 miles per hour top speed in 1934, far faster than any other fighter in any other air force. Later, a massive 1,100-horsepower M-63 engine was installed, giving the I-16 a top speed of more than 326 mph -- and even trickier handling.

As with all aircraft, pilots who mastered the I-16 became very fond of it, not least because its rugged construction allowed it to take massive battle damage and still get home -- the aim of all pilots in the end, no matter how reckless their talk at the bar.