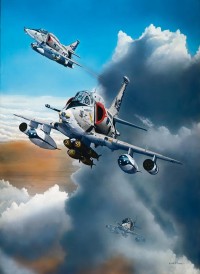 Jet power in the raw: A double threat of well-armed Douglas AE-4 Skyhawks streaks from the clouds, superbly piloted and ready to take on all challengers.
pil

The end of World War II found the victorious Allies with thousands of fighter planes, all but a few of which were obsolete because the Jet Age had arrived. Although peacetime budgets were cut to a minimum, military and civil leaders poured as much money as possible into research and development.

The result was a series of ever more powerful and reliable jet engines, as well as new and increasingly radical airframes. The growth in jet power was paralleled by a revolution in electronics.

This, plus the combination of new engines, new airframes, and advanced avionics resulted in aircraft of superb performance and amazing longevity.

Below you'll find links to profiles, specifications and photos of these classic airplanes of the Jet Age:

The Boeing 747's size amazed the public and had many people wondering if it would even be able to fly. Read about the largest airliner in history.

Get details on the classic airplane that served as the United States' principal fighter in Vietnam and dominated combat aviation with its versatility and speed.

The sharp, angular frame of the F-117A Stealth gave the classic airplane a modern look, but its main feature made it almost "invisible." Learn more about the F-117A's ability to deflect incoming radar beams here.

The Soviet-built MiG-15 fighter appeared in combat during the Korean War and, by 1953, was abandoned by the Soviets as a front-line fighter.

Many pilots view the Sabre as the last "pure" fighter plane. Find out what made this classic airplane so special and versatile.

With more than 29 variants used by the U.S. Navy and Marines, the lightweight Skyhawk was truly a remarkable classic combat airplane, remaining in production for 25 years.

The B-52, also known as the Buff, has proven successful in Vietnam, the Persian Gulf War and other important missions. Learn the Buff's many roles.

This Soviet aircraft was one of the greatest jets of its time with different versions serving in nearly 40 air forces across the globe. Get the details here.

The creation of the 707 was a huge step for globalization, making international travel easier for the public. Read more about this landmark in aviation history.

The Blackbird was named for its heat-resistant black paint and remains one of the world's fastest, highest-flying aircraft since its first flight in 1964.

The F-15 Eagle was created after the Vietnam War when pilots felt the need for a new fighter plane that would dominate the sky. Take a closer look at this classic airplane in this article.

Often referred to as the "Electric Jet" rather than the "Fighting Falcon," the F-16 is fully equipped with the latest radars, night vision equipment and missiles. See specifications and photos here.

The B-2's unusual appearance and high cost -- approximately $2.2 billion per copy -- prove just how much classic airplanes have evolved over the century.