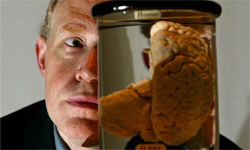 He looks ready to plumb the brain of the father of computers, on display at the British Royal College of Surgeons in 2002.
Sion Touhig/Getty Images

For some of us, the phrase "put your calculators away for this exam" will always elicit anxiety, but those calculator-free exams give us a taste of what life was like for Charles Babbage. The English inventor and mathematician, born in 1791, was tasked with poring over mathematical tables in search of errors. Such tables were commonly used in fields like astronomy, banking and engineering, and since they were generated by hand, they often contained mistakes. Babbage longed for a calculator of his own. He ultimately would design several.

Of course, Babbage didn't have modern computer components like transistors at his disposal, so his calculating engines were entirely mechanical. That meant they were astoundingly large, complex and difficult to build (none of Babbage's machines were created in his lifetime). For instance, Difference Engine No. 1 could solve polynomials, but the design called for 25,000 separate pieces with a combined weight of around 15 tons (13.6 metric tons) [source: Computer History Museum]. Difference Engine No. 2, developed between 1847 and 1849, was a more elegant machine, with comparable power and about one-third the weight of its predecessor [source: Computer History Museum].

Impressive as those engines were, it was another design that led many people to consider him the father of modern computing. In 1834, Babbage set out to create a machine that users could program. Like modern computers, Babbage's machine could store data for use later in other calculations and perform logic operations like if-then statements, among other capabilities. Babbage never compiled a complete set of designs for the Analytical Engine as he did for his beloved Difference Engines, but it's just as well; the Analytical Engine would have been so massive that it would have required a steam engine just to power it [source: Science Museum].