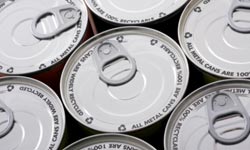 Enjoy a nice can of soup for lunch? You have the Industrial Revolution to thank for the process that made that meal possible.
iStockphoto/Thinkstock

Open your kitchen cabinets and you're bound to find a particularly useful Industrial Revolution invention. It turns out the same period that brought us the steam engine also altered how we store food.

After spreading from Great Britain to other parts of the world, inventions continued to fuel the Industrial Revolution at a steady rate. One case involved a French chef and innovator named Nicolas Appert. Devising ways to preserve foods without stripping them of their flavor or freshness, Appert tested several methods to store food in containers. Remember, storing food required drying or salt -- treatments that didn't bode well for flavor.

Appert also thought storing food in containers would be useful to sailors suffering from malnutrition at sea. Driven to succeed, he worked on boiling techniques that consisted of adding food to a jar, sealing it and then boiling it in water to create a vacuum-tight seal. He achieved this by developing a special autoclave for food canning in the early 1800s.

The basic concept took hold, and today we enjoy canned goods ranging from Spam to SpaghettiOs.