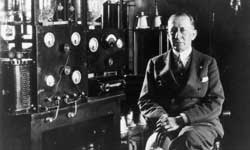 Who needs a smartphone when you have this impressive telegraph on your yacht, as Italian inventor and radio pioneer Guglielmo Marconi did in the 1930s?
Hulton Archive/Getty Images

Before the age of smartphones and laptops, people still used technology to communicate -- albeit at a slower pace -- with an Industrial Revolution invention called the telegraph.

Through an electrical system of networks, the telegraph could transmit messages from one location to another over long distances. The receiver of a telegraph message would interpret the markings produced by the machine, which were encrypted in Morse code.

The first message sent in 1844 by Samuel Morse, the telegraph's inventor, indicates his excitement. He transmitted "What hath God wrought?" with his new system, expressing he had discovered something big. That he did! Morse's telegraph allowed people to communicate almost instantaneously without being in the same place.

Information sent via telegraph also allowed news media and the government to share information more quickly. The development of the telegraph even gave rise to the first wire news service, the Associated Press. Eventually, Morse's invention also connected America to Europe -- an innovative and global feat at the time.