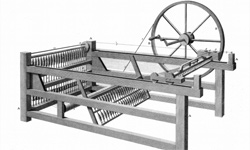 Hargreaves' spinning jenny had a big impact on textiles.
Photos.com/Thinkstock

Whether it's the contents of your sock drawer or the most fashionable article of clothing, advancements in the textile industry during the Industrial Revolution made mass production possible.

The spinning jenny had a big part in these developments. Once raw materials such as cotton or wool were gathered, they had to be spun into yarn -- an often laborious task for people.

James Hargreaves had pity on those poor souls. Accepting the challenge of the British Royal Society of Arts, Hargreaves developed a device that exceeded the contest's requirements to spin more than six threads simultaneously. He constructed a machine that spun eight threads at once, dramatically increasing the efficiency of the activity.

Hargreaves' device consisted of a spinning wheel that controlled the flow of material. One end of the machine held the spinning material in place while another spun it into thread by manually spinning a wheel.

Up next: a revolutionary metal.