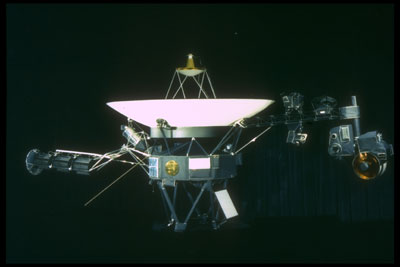 Both Voyager spacecraft are identical. They don't have a sleek, aerodynamic design because there's no aerodynamic friction in space to worry about. Weighing 1,592 pounds (722 kilograms), they're made up of a main bus, a high-gain antenna, three booms that held scientific instruments and the power supply, and two other antennae.

The main bus is the body of the Voyager. It's a 10-sided box 5.9 feet (1.8 meters) across, and it contains some scientific instruments, electronics and a fuel tank for the rocket thrusters. The thrusters are used to reorient the craft as it moves through space.

One of the booms extending off of the main bus carries Voyager’s radioisotope thermoelectric power supply. Pellets of plutonium dioxide release heat through natural decay. This heat is converted into electricity using a series of thermocouples. Although the power output isn't very strong, it powers the electronics and instruments on board the Voyagers for a very long time. Power isn't expected to deplete completely until 2020. The power supply was placed on a boom to keep the radiation from interfering with the other scientific instruments.

The other two booms carry a series of instruments. These include:

Perhaps the most significant instruments on board the Voyagers, as far as the public is concerned, are the cameras. Also mounted on the instrument boom, the cameras have a resolution of 800x800, with both wide-angle and narrow-field versions. The cameras returned unprecedented photos of the outer planets and gave us views of our solar system that we had never before witnessed (including the famous departure shot showing both Earth and Earth’s moon in the same frame). The boom carrying the cameras could be moved independently from the rest of the craft.

The Voyager’s computer system was very impressive as well. Knowing the craft would be on its own much of the time, with the lag between command and response from Earth growing longer the farther the craft went into space, engineers developed a self-repairing computer system. The computer has multiple modules that compare the data they receive and the output instructions they decide on. If one module differs from the others, it's assumed to be faulty and is eliminated from the system, replaced by one of the backup modules. It was tested shortly after launch, when a delay in boom deployment was misread as a malfunction. The problem was corrected successfully.

In the next section, we’ll find out what we learned from the Voyager missions.

While the Voyagers themselves did all the data gathering, there were important mission elements on the ground as well. The Voyagers’ signals became increasingly difficult to detect as they flew out into the outer solar system, so NASA improved a worldwide network of radio receiving stations to better detect them. A series of 230-foot (70-meter) radio dishes pull in the Voyager data and send signals out to it, maintaining almost continuous communication [source: Evans].