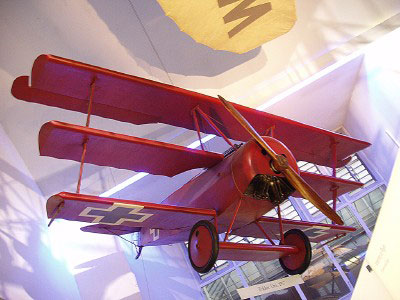 Germany was keenly aware of the shortcomings of its Albatros fighters during close-in, high-altitude dogfights. The Fokker Dr I triplane was a remedy to this problem. See more classic airplane pictures.

The tiny Fokker Triplane has emerged as the most famous of all German planes of the First World War. If one had to assign a percentage factor to this fame, about ten percent comes from the fact that it was the mount in which the leading German ace, Baron Manfred von Richthofen, was killed, shortly after his 80th, and last, victory. Amazingly, about 90 percent must be attributed to the invocation of the aircraft in the late Charles Schultz's comic strip, Peanuts, in which Snoopy flew his "Sopwith Camel" doghouse against the Red Baron's inevitably victorious Fokker Triplane.

The Triplane was created in response to the performance of Great Britain's Sopwith Triplane, which had amazing maneuverability and a startling rate of climb. Anthony Fokker tasked Reinhold Platz to match the Sopwith Triplane.

Despite his disdain for complicated structures, Platz succeeded admirably with the Dr I (Dr for "Driedecker" or triplane). Using the available Oberursel rotary engine of 110 horsepower, Platz created a handsome aircraft with three essentially cantilever wings that exceeded the English Triplane's performance. The Fokker Dr I, while relatively slow, had a matchless maneuverability and a rate of climb that amazed opposing Allied pilots.

Germany produced formidable aircraft during World War I, and few had the promise of the Fokker Dr I. Flawed wing design ended production prematurely. Before that happened the plane achieved outstanding success.

Richthofen, recovering from a recent wound, was given one of the first two production aircraft and was delighted with it, writing in his unit's logbook "F I/102/17 [the serial number of his brand new Triplane] is superior to all foes." This was high praise from a man who had bitterly condemned his Albatros for months.

Unfortunately for the Germans, a series of fatal crashes revealed quality control problems in the construction of the Fokker Dr I's wings. The planes were refitted with newly manufactured wings, but production was halted at 320, and the Fokker Triplane was gradually withdrawn from front-line service.