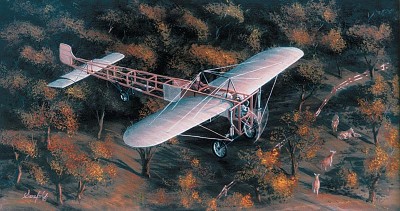 Early examples of the Bleriot XI utilized a four-blade propeller that was unable to make efficient use of the REP engine's power. Later, the REP was replaced by an Anzani powerplant that drove a two-blade prop that was more capable than its predecessor. See more classic airplane pictures.

The Bleriot XI monoplane was the culmination of five years of hard work by Louis Bleriot. He personally flew this classic airplane on July 25, 1909, crossing the English Channel in just 36 minutes. The military implications of his flight were immediately apparent: England was no longer an island.

At the moment of his landing, Bleriot became the most celebrated man in Europe, and a flood of orders came in for copies of his delicate-looking Bleriot XI with its distinctive, uncovered rear fuselage. For the French, there was considerable satisfaction in the creation of a monoplane that seemed clearly superior to the Wright biplanes.

The Bleriot XI was just as successful when flown by other pilots, and it was a rare air meet in Europe that did not feature a Bleriot XI among the prizewinning aircraft. By 1913, Louis Bleriot's factories had delivered no less than 800 examples of the Bleriot XI, an amazing production run for the time, especially for an aircraft priced at about $5,000. Bleriot schools turned out many aviators and, of course, used Bleriot trainers.

But the very success of the Bleriot XI spelled trouble for it. This classic airplane was used for ever more daring maneuvers, including loops by Adolphe Pegoud. The mad desire for speed led to installations of more powerful engines.

Harriet Quimby was America's first licensed woman pilot. In 1912 she flew a Bleriot XI from England to France across the English Channel. She was killed months later in a Bleriot monoplane, during an exhibition near Boston.

Soon there was a rash of accidents, some involving the most prominent fliers in France. Leon Delagrange, Hubert Leblon, and George Chavez, all famous and successful pilots, were killed when their Bleriot XIs mysteriously broke up in midair. Further accidents encouraged the French and, later, the British Air Force to regard the monoplane as inherently unsafe.

Louis Bleriot attempted to solve the problem with a much stronger structure, but it would be years before the true nature of the problem -- speeds and maneuvers for which the Bleriot XI was ill-suited -- was understood. Pilot error, then, is nothing new.

Should black box data be stored in the cloud?
How Are Airplane Cabins Pressurized?
Who Wants to Knock a Drone Out of the Sky?