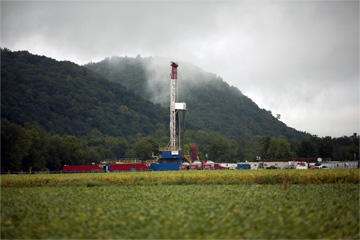 Farmland, farmland, farmland and ... drilling rig? A soybean field lies in front of a natural gas drilling rig on Sept. 8, 2012, in Fairfield Township, Penn. The area sits above the Marcellus Shale, one of the hearts of hydraulic fracturing in the U.S. See more oil drilling pictures.
Robert Nickelsberg/Getty Images

Maybe you've heard that we have a bit of an energy crisis?

With tumultuous gas prices and dependence on unsustainable fossil fuels at a high, there's a desperate need to find alternative energy sources. And let's be honest, most energy producers wouldn't be upset to simply find more sources of fossil fuels, either.

Hydraulic fracturing -- or hydro fracking, or just plain fracking -- is one way that we can get at "hidden" reserves of natural gas, petroleum -- even water. It sounds extremely complicated (and is, in fact, a pretty cool feat of science and engineering), but fracking is a fairly simple process. Way far underground (we're talking some 7,000 feet/2,133 meters below the surface), rocks like shale can hold gases, water or oil in their pores. Hydraulic fracking moves that resource from the pores of the rocks to production wells [source: ProPublica].

It's done by creating horizontal "veins" off a vertical well, and then pumping that horizontal well full of water (plus sand and some chemical additives) at an extremely high pressure. This causes fissures in the rock that branch off, releasing gas, oil or water into the cracks created. The gases and oils are forced into the horizontal wells and then flow up to storage tanks with the water that comes back up.

So it's smooth sailing from there! The world gets to grab some hard-to-reach energy resources and everybody wins, right? Except, of course, the process is extremely fraught with environmental and safety concerns. From allegations of groundwater contamination to reports of decimated land, critics have a growing list of fears when it comes to hydraulic fracking.

In this article, we'll dig down deep to detail the mechanics of hydraulic fracking. We'll also look into the effects -- both positive and negative -- that fracking can bring to the environment and communities, while peering into the future of fracking. 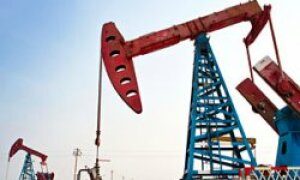 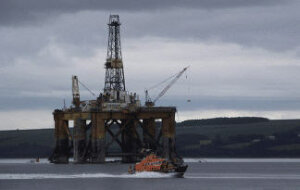