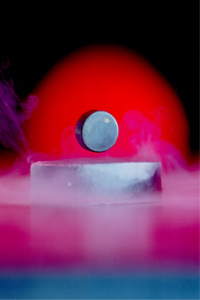 What you're seeing here is the Meissner effect, or the expulsion of a magnetic field from a superconductor as it transitions to its superconducting state.
Image courtesy Argonne National Laboratory

One of the unwritten rules of physics says you can't get something for nothing; at best, you can manage a fair exchange rate between how much energy you pump into a system and how much you coax out of it.

Consider your car: On average, only 12.6 percent of the chemical energy you pump in at $3.50-plus (or whatever you pay) per gallon translates into motion. The rest goes to overcoming drag, inertia and other mechanical inefficiencies, with a whopping 62.4 percent consumed by engine friction, air pumps and waste heat [source: California Energy Commission].

Heat crops up in all sorts of systems. Like an energy embezzler, it skims off the top of chemical reactions, physical systems and electrical circuits. Whether it's the consequence of lost efficiency or its cause, the upshot is you're taking a loss in the deal. Heat is why we can't achieve perpetual motion (or movement that never ceases).

It's also the reason power plants must amp up current to high voltages when transmitting it across country: to overcome energy lost to resistance -- friction's electrical counterpart. Imagine if we could find a way to remove resistance, thereby eradicating energy loss: no service charges, no taxes and no protection money. Energy in = Energy out.

Enter superconductors. If the three laws of thermodynamics say that there's no such thing as a free lunch, then superconductors have their cake and eat it, too. Send current through a superconducting wire, and it loses no energy to resistance. Bend the wire into a loop, and it will hold charge indefinitely. Levitate it above a magnet, and the sun will devour the Earth before it will fall.

Soon after its discovery in 1911 by Dutch physicist Heike Kamerlingh Onnes and his collaborators, Cornelis Dorsman, Gerrit Jan Flim and Gilles Holst, superconductivity inspired dreams of no-loss electrical transmission. Unfortunately, there was a catch.

To make matters worse, superconductors leave their resistance-less state if they are exposed to too large a magnetic field -- or too much electricity.

All was not lost, however. Modern superconductors, such as niobium-titanium (NbTi), have raised the bar on how much magnetic load they can tolerate. Their superior magnetic fields make them useful in certain maglev trains, as well as in proton accelerators, such as the one at Fermilab, or MRI machines, their most common application. In the near future, researchers hope to use them in emerging power technologies, such as energy storage systems or high-efficiency wind turbines.

Before we look at the shocking ways superconductors sidestep resistance, let's review how resistance works. 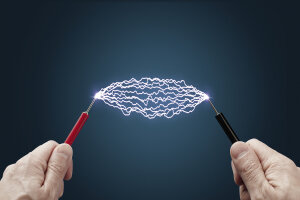 Is it possible to generate electricity directly from heat?