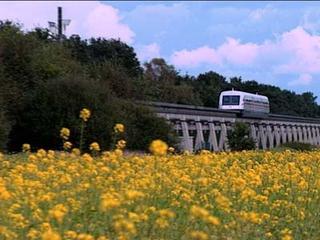 One of the coolest applications of superconductors has got to be maglev trains. Ride along in one in this "Extreme Engineering" video.
Discovery

Some conductors are better than others; the key is organization. Good train conductors keep the railroads running on time -- and Arturo Toscanini kept the NBC Symphony Orchestra playing in time -- by wrangling complex elements into orderly systems.

Good electrical conductors display a similarly harmonious organization but must contend with resistance. In fact, resistance is what separates conventional conductors from their super-powered cousins.

Think of free electrons in a typical conductor as people milling about a train terminal. An applied current is like the bell announcing the train's arrival: In an instant, individual motions transform into a single, united movement toward the platforms -- or would, were it not for a few troublemakers who stumble, jostle, dither at the newsstands or refuse to make way on the escalator. Thanks to the resistance they provide, some travelers miss the train, and the current loses energy. Such is life in Conductor Terminal.

Now, replace those travelers with an undercover flash mob. At the bell, they partner up and perform a synchronized, choreographed dance across the terminal. No one misses the train, and they're all less tired when they get there. That's the wonder of travel in Superconductor Station.

Before we study the steps of this particle pas de deux, however, let's take a step back and review how resistance muddles mundane materials. We'll start simple and add complexity as we go.

Although there are exceptions, when we say electric current, we usually mean a stream of electrons running through a medium. How well a material conducts electricity relates to how easily its component atoms donate electrons. Insulators are miserly, whereas conductors spend theirs like sailors on shore leave.

The donated electrons, now known as conductance electrons, do not orbit individual atoms but instead float freely throughout the conductor, like our train commuters above. When a current is applied, they flow through the material and transmit electricity.

A conductor consists of a lattice of atoms; for electricity to flow, electrons must move through this lattice with as little interference as possible. Like a bunch of tennis balls thrown through a jungle gym, odds are good that some electrons will hit the lattice. The odds of interference go up if areas are bent out of shape. Thus, it's easy to see how material flaws constitute one cause of resistance in conductors.

In this jungle gym analogy, atoms are represented by the intersections of metal rods. In actuality, a conductor's lattice isn't stiff; its atoms vibrate, and the interactions connecting them oscillate, so it's better to think of it as a grid of springs. What causes these atoms to vibrate? The higher the temperature, the more the lattice vibrates, and the more likely our tennis balls are to run into interference. Chalk up the second major source of resistance to our old friend, heat.

This raises the question: If heat is the problem, might not cold be the answer? Just chill for a second: We'll get to that in the next section.