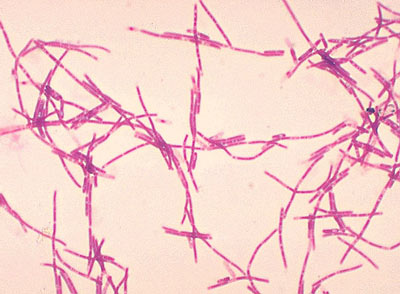 According to an article in the Journal of the American Medical Association, a blood sample is taken from the patient and cultured for six to 24 hours. At this point, a "Gram stain" can be done. The Gram stain highlights the bacteria.

The Gram stain takes about 10 to 15 minutes and can identify whether the bacteria come from the anthrax category. At that point, biochemical testing can be done to find the specific anthrax bacteria, which takes another 12 to 24 hours. Usually, the specimens have to be sent to national reference laboratories for comparison with stock anthrax samples.

Anthrax is treated with the antibiotics penicillin, ciprofloxacin or doxycycline. The antibiotic most often used is ciprofloxacin, partly because of rumors that the Soviet Union had developed a penicillin-resistant form of anthrax for use in biological warfare. It is also specifically recommended by the U.S. Food and Drug Administration (FDA) for use in treating anthrax.

Treatment of inhaled anthrax has to start very early in the progression of symptoms. If treatment is begun after the symptoms have progressed too far, then the bacteria may be killed but the toxins remain in the body.