Can a baby have three biological parents? 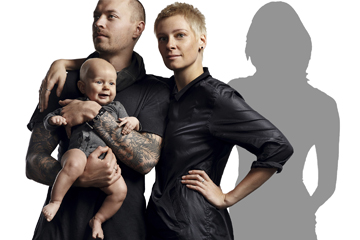 In West Bloomfield, Michigan, Alana Saarinen is, by all accounts, a normal healthy teenage girl who enjoys playing the piano and reading books. But there's one big difference between her and most people, because each one of her body's cells contains DNA from three different people [sources: Weintraub, Pritchard].

Alana was conceived in 2000 through a special type of in vitro fertilization (IVF) called cytoplasmic transfer, which was developed to enhance fertility in women who had been unsuccessful at conceiving through IVF. Her parents Sharon and Paul Saarinen contributed the egg and sperm. But in addition, doctors inserted a small amount of cytoplasm, a gel-like cellular material from a third woman's egg as well. That process also passed along some of the donor's mitochondrial DNA, which helped to fix genetic problems that can prevent a pregnancy [sources: Shoot, FDA, Weintraub].

Alana isn't the only child born through three-parent IVF. After cytoplasmic transfer was pioneered by Dr. Jacques Cohen, a New Jersey-based fertility specialist, by various accounts between 30 and 100 children were born as a result of the procedure [sources: Weintraub, Levy et al.]. But in 2001 the U.S. Food and Drug Administration (FDA), which feared that altering the genetic makeup of children might be too risky, told clinics that they couldn't perform the procedure anymore without undergoing elaborate regulatory requirements [source: FDA]. Some critics also argued that mixing the DNA from two different women was unethical [source: Weintraub]. All of the clinics stopped performing three-parent IVF (alternately called three-person IVF).

But in recent years, there's been a resurgence of interest in cytoplasmic transfers and other forms of three-parent IVF. As the examples of Alana and other healthy children have shown, having three biological parents doesn't seem to have the sort of scary risks that naysayers feared. And as proponents point out, the mitochondrial type of DNA from donors doesn't play any part in determining what we usually think of as a person's inherited traits like appearance and abilities [source: Malik].

And besides helping with conception, the donor mitochondrial DNA, whose function is to help cells run properly, has another potentially valuable attribute. It can help prevent more than 50 different genetic diseases, all of which would be otherwise incurable. Some of these conditions can cause problems such as muscle weakness, seizures, blindness, deafness, organ failure and even death [sources: Malik, Lupkin].

For those reasons, Great Britain became the first nation in the world to officially legalize three-parent IVF in early 2015 [source: Malik]. And in the U.S., government regulators are taking another look at three-parent IVF's potential for preventing serious diseases in children [source: CGS]. So there's an increasing possibility that in the near future, more children will be born who technically do have three parents.