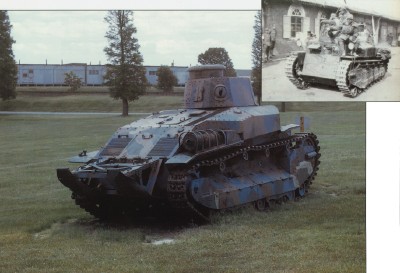 The Type 89 CHI-RO (an abbreviation of the Japanese word for "medium") tank was ideally suited to fight a war where the enemy was infantry equipped with small arms, machine guns, and a few larger guns. It was this type of war that the CHI-RO fought in China and Manchuria in the 1930s. The Japanese followed the British theory of tank warfare in which one class of tanks was to accompany infantry and serve as a mobile gun platform.

The CHI-RO evolved from the Number 1 infantry tank, a design first laid down in 1925 and intended as a light tank. But growing weight and mechanical difficulties with the first prototype convinced the Japanese Army Technical Headquarters, responsible for the development of armored vehicles, to design a smaller tank similar to the British Medium C produced by Vickers, Several British Medium C tanks were obtained in 1927.

The new tank used a Mitsubishi 105 horsepower gasoline engine to produce a road speed of only 15,5 miles per hour. Since Nationalist Chinese forces were known to have only a few 37 millimeter antitank guns, .5 inch of armor was considered sufficient, and this was the maximum used. The tank was armed with a short-barrel 57mm cannon for knocking out pillboxes and stone and masonry forts, Two 6.5mm machine guns were installed, One was placed in the turret and pointed to the rear, a practice followed with most Japanese tanks, and one was located in the hull, The Type 89 was driven through the rear drive sprocket, Nine road, or bogie, wheels were mounted in pairs on each side with the forward road wheel on an independent suspension. Five smaller return wheels were mounted along a girder.

The new tank was officially turned over to the Japanese Army in the year 2589 (In the Gregorian calendar, 2589 is 1929.); the model designation Type 89 comes from this, The CHI-RO first saw action during the Shanghai Incident in 1932, They were used by Special Naval Landing Forces-erroneously called Imperial Marines. They performed better than the French OTSU-GATA SENSHA tanks (Renault Light Tanks) because of their stronger suspension systems. They also proved far more reliable.

Learn more about the changes made to the Type 89 CHI-RO tank's armor, weapons and other systems on the next page.