by the Editors of Publications International, Ltd. Nov 20, 2007

The Chieftain Main Battle Tank (MBT) derives from a long line of tanks that began with the Mark II Matilda II in 1939.

Matilda's successors evolved from infantry support through cruiser to medium battle tank as they were made progressively faster and up-gunned -- Matilda II (40mm), Cromwell (57mm and 75mm), Comet (76mm), and Centurion (76.2mm, 83.4mm, and 105mm).

Each succeeding design also grew heavier. The Centurion weighed in at nearly 57 tons and could move at only 22 miles per hour on the road.

In the late 1940s with the threat of the Soviet T-54/T-55 and the rumored T-62 in mind, designers at Leyland had intended the Chieftain Main Battle Tank to replace both the Centurion Medium Tank and the Conqueror Heavy Tank. The resulting tank was an accommodation among firepower, speed, and agility.

The design of the Chieftain emphasized firepower and protection, but the price paid was less mobility. The Chieftain is a heavy tank at 60 tons and is considered underpowered, even with the larger 650-horsepower Leyland engine installed. The initial engine, a 585-horsepower diesel, was replaced in 1967.

The Chieftain's silhouette was two feet shorter than that of its forerunner, the Conqueror. Armor thicknesses are classified, but cast and rolled armor was used on the hull.

The turret was cast in two pieces and then welded together. Appliqué armor provided additional turret protection at the front and behind the commander's cupola.

The hull was cast in three pieces, which were welded together, and, like earlier British tanks, divided into three compartments -- driving, fighting, and engine, front to back.

The Chieftain carried a crew of four. The driver sat near the front in a reclining seat with a hatch to the right. The commander, gunner, and loader were in the turret, which contained a separate rotating cupola for the commander. The commander had full 360° vision through a variety of periscopes, which were also fitted with night vision devices.

The Chieftain Main Battle Tank was armed with the 120mm L11A5 rifled main gun, which made it one of the most heavily armed MBTs of its time.
©2007 Publications International, Ltd.

Full nuclear-biological-chemical protection was provided through a forced-air filtering system. Two six-barreled smoke dischargers were mounted on the turret. An infrared searchlight was mounted to the right of the commander's cupola.

The Chieftain Main Battle Tank was built around the 120mm LI 1A5 rifled tank gun. When introduced in May 1963, the Chieftain was the most powerfully armed tank in the world.

The British Army decided to re-equip its Chieftains with an even more powerful L30 high-pressure rifled gun. The Chieftain was also equipped with three machine guns, a 12.7mm range-finding gun and two 7.62mm NATO machine guns, one coaxial and the other, which was mounted within reach of the commander's cupola, for antiaircraft use.

All Chieftains had a fully integrated fire control system, which allowed the 120mm main gun to be fired accurately either out to 2,000 meters while moving or out to 3,000 meters while stationary.

The Chieftain has been widely used throughout the world by Great Britain as well as other nations. One of the better customers for the Chieftain was Iran prior to 1978.

Starting in 1971, Iran bought nearly 900 Chieftains, and all were delivered before the Shah's government fell in 1979. The Chieftain saw a great deal of service in the Iran-Iraq War of 1980-1988 and gave a very good account of itself against Soviet tanks.

Iraq is said to have captured more than 300 Chieftains during the fighting, a large number of which were undamaged because they were abandoned by their crews.

Chieftains were also purchased by Jordan, Oman, Iraq, and Kuwait. The refusal of Great Britain to sell Chieftain tanks to Israel during and after the 1967 Arab-Israeli war prompted Israel to develop its own MBT, the Merkava.

To learn about Chieftain Main Battle Tank specifications, continue to the next page. 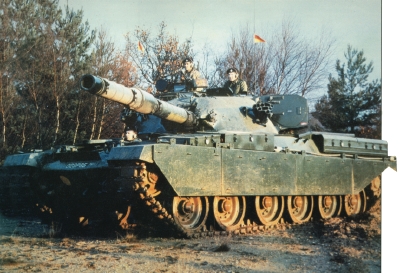 More than 1,900 Chieftain Main Battle Tanks were built in the United Kingdom, 900 for British forces and the remainder for several other countries.
©2007 Publications International, Ltd.