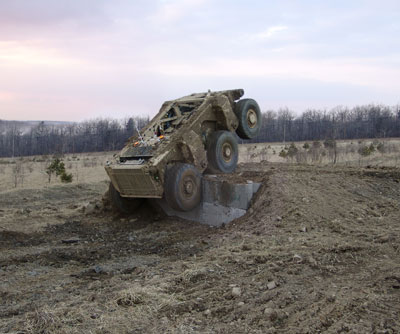 Crusher made its debut in true monster-truck style: The two prototypes entered a Carnegie Mellon University building to blaring music and flashing lights. One Crusher stood by while its counterpart proceeded to roll over and crush piles of cars that would have most monster trucks backing up with their tails between their legs. Crusher is no typical truck. It can drive right over a 4-foot vertical wall while carrying 8,000 pounds of cargo.

Crusher is an unmanned ground vehicle (UGV) funded by DARPA and designed by Carnegie Mellon's National Robotics Engineering Center (NREC). The thrust of the Crusher project – which builds on another NREC-designed UGV called Spinner (Crusher is sometimes called Spinner version 2.0) – is pretty much the thrust of all of the military-funded research and development in the UGV world right now: increased perception capabilities, autonomy and ruggedness. The U.S. Army would like few things more than an unmanned, silent tank that can carry limitless payload, defend itself against the enemy and speed unfettered across terrain that would have the Hummer curled up in fetal position.

The Crusher probably will never see mass production. The cost would be too high (the designers don't even quote a number). It's designed as a functioning prototype to test various technologies the NREC is developing as part of a program called UPI.

UPI stands for Unmanned Ground Combat Vehicle PerceptOR (off-road) Integration, a DARPA-funded mouthful that encompasses experiments to "assess the capabilities of large scale, unmanned ground vehicles (UGV) operating autonomously in a wide range of complex, off-road terrains" [ref]. The 6.5-ton Crusher weighs nearly 30 percent less than Spinner and can carry more cargo. The only thing the NREC left out of Spinner's upgrade is the ability to keep on truckin' if it's flipped upside down. No word on why that cool function disappeared, although logic would suggest it was either to make some of Crusher's other upgraded functions possible or to cut a high-cost capability that may not be crucial to UPI's main mission.

So, what can Crusher do?

According to the NREC, Crusher's technology is six to 10 years from real-world implementation. While smaller, human-controlled robots have made it onto the battlefield already (see How Military Robots Work), massive, unmanned robots like Crusher are still in laboratories. The complexity of the perception and control systems necessary for a large-scale robot to handle unknown terrain and conditions are still in the research-and-development stage. Crusher's perception and navigation systems are prototypes intended as test platforms for increasingly innovative approaches to ground combat vehicles that require no human input to carry out their mission.

In the next section, we'll take a look at some of those systems. Since Crusher is first and foremost a military project, complete details aren't available for the general public, but HowStuffWorks has managed nonetheless to find out some interesting information. 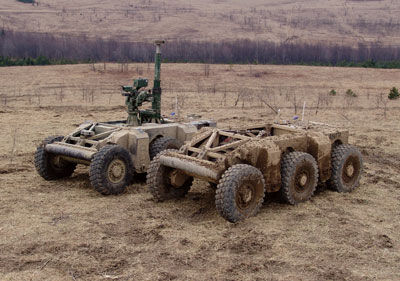 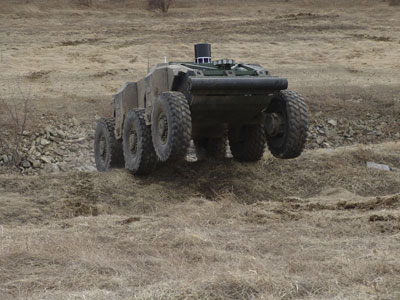 For more information on Crusher, UGVs and related topics, check out the links on the next page.