How the Air Force One Hybrid Works

by Chris Pollette
NEXT PAGE 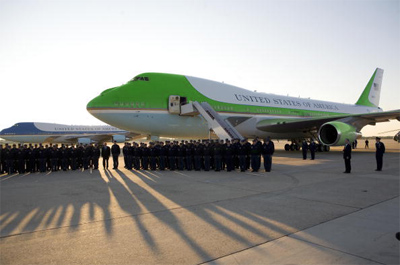 The new hybrid Air Force One sits next to its predecessor on the tarmac in Washington D.C. in this April 1, 2008 photo.
Getty Images/HowStuffWorks

Acting on an initiative created by President George W. Bush, the U.S. government has unveiled a new version of the president's venerable aircraft, which most people know as Air Force One. The new version, a modified Boeing 747-400, uses a combination of flexible fuel and hybrid technology to improve fuel efficiency as it shuttles the president to appointments around the world.

Alternative sources of energy are a stated goal of U.S. President George W. Bush's energy plan. In his 2008 State of the Union address, Bush told Congress, "our security, our prosperity, and our environment all require reducing our dependence on oil" [source: The White House]. In the past, Bush has mentioned using switchgrass for automotive fuel and clean coal for houses and businesses. High fuel prices have also done much to convince Americans to embrace fuel conservation. And 2007 was a record-setting year for sales of hybrid automobiles -- an estimated 2.4 percent of all cars sold in the United States were hybrids, according to research firm J.D. Power & Associates [source: Bloomberg News].

Why build a hybrid Air Force One, and why now? "The plane -- like the bald eagle -- is a symbol of the United States," one U.S. Air Force representative said. "Converting the aircraft makes a powerful statement to the world that the country is willing to become a leader in alternative fuel technology."

So how is the hybrid Air Force One different from other aircraft? Why is it special, and how was this enormous initiative kept under wraps until its unveiling? Read on to find out.

Now that it's no longer April 1, we should let you know that this technology doesn't exist -- yet. Find out more about April Fools' Day and what, if anything, it has to do with fish.